Dynamic Discovery (D2) is a layer of indirection similar to DNS for the rest.li framework. Functionally speaking, D2 translates a URI like d2://<my d2 service> to another address like http://myD2service.something.com:9520/someContextPath.

Rest.li uses D2 to help decouple a REST resource from the real address of the resource. D2 also acts as a client side load balancer.

As we said above, D2 works like DNS. It translates a D2 URI to a real address. D2 works by keeping the state in Zookeeper. We chose Zookeeper because it's distributed and fault tolerant.

When a client is about to send a request, the D2 client library extract the service name from the d2 URI. Then the d2 client library queries zookeeper for the cluster that owns that service. Once d2 client know the cluster, it will then queries zookeeper for the available URIs for that cluster. Given a list of URIs, D2 client can select which URI to send the request to. The D2 client will listen for any updates related to the cluster and service it previously contacted. So if there's any changes happening either because the server membership changes, or there are new services in a cluster, the d2 client can pick up the changes immediately

Sometimes D2 client's connection to zookeeper might be interrupted. When this happens, D2 will not know what is the latest state so it will assume the state is the same as before. D2 keep backup of the state in the filesystem. If the zookeeper connection interruption happened for a long period of time (configurable), D2 will discard the state and will fail to work.

Running D2 requires a Zookeeper ensemble running somewhere. Please download Zookeeper if you don't have one yet.

As we said above, all the load balancing happened in the client side. D2 client keep tracks of the health of the cluster.

There are 2 types of mode that we can use to load balance traffic.

We aim to alternate between these 2 modes but it’s not always guaranteed.

We measure 2 different things for health. One is the cluster health and the other one is the client health.

For cluster health, we only measure the average cluster latency. If the average cluster latency is higher than LoadBalancer’s high water mark, we’ll increment the drop rate by 20%. Drop rate means all traffic to this cluster will be dropped 20% of the time. So obviously cluster health is relevant only to CALL_DROPPING mode. If the cluster latency exceeds high water mark 5 times in a row, we’ll reach 100% drop rate. We have some measure of “recovery mode” to prevent the cluster from getting stuck in perpetual “drop everything” mode. During this mode, we’ll still allow traffic to pass by to calibrate our cluster latency once in a while.

The points are used to distribute traffic amongst many clients. For example there are 4 clients for service “widget”. In perfect condition, each client would have 100 points (this is configurable in service properties). So total points in the hash ring would be 400. If one client’s latency becomes higher than water mark, the computed drop rate will change then the number of points of that client maybe reduced to 80. So that client will receive less traffic and the other servers will get the remaining traffic.

We try to alternate between CALL_DROPPING and LOAD_BALANCING mode. The logic for doing this alternation happens in Load Balancer Strategy.

Implementation of the client load balancer

Here are the moving components that you should know about load balancer:

In the following section we’ll elaborate more of each component:

D2 uses a hierarchy of properties to model the system:

Like its name, ServiceProperties defines anything related to a service. The most important one is the load balancer strategy properties. For example: we can set the highWaterMark and lowWaterMark for this service. If the average latency of all the servers that serves this resource is higher than highWaterMark we’ll start dropping calls because we know the servers are in a “degraded” state.

(Note that we are migrating connection properties to ServiceProperties. This allows users to have a more fine-grained configuration. We estimate the code change will be released in version 1.8.13 and above)

UriProperties define a cluster name and asset of URIs associated with the cluster. Each URI is also given a weight, which will be passed to the load balancer strategy.

D2 Client is a wrapper over other simpler clients. The real implementation of D2 Client is DynamicClient.java. But underneath we use R2 client to shove bits from client to server. So DynamicClient wraps r2 clients with three classes: TrackerClient, RewriteClient, and LazyClient. The underlying R2 clients are: HttpNettyClient, FilterChainClient and FactoryClient.

The TrackerClient attaches a CallTracker and Degrader to a URI. When a call is made to this client, it will use call tracker to track it, and then forward all calls to the r2 client. CallTracker keeps track of call statistics like call count, error count, latency, etc.

The RewriteClient simply rewrites URIs from the URN style to a URL style. For example, it will rewrite “urn:MyService:/getWidget” to “http://hostname:port/my-service/widgets/getWidget”.

The LazyClient is just a wrapper that does not actually create an r2 client until the first rest/rpc request is made. 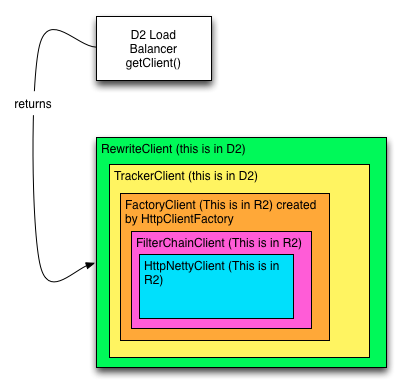 The random load balancer strategy simply chooses a random tracker client from the list that it is given. If the list is empty, it returns null. This is the default behavior for dev environment. Because in development environments, one may wish to use the same machine for every service. so with this strategy, we will always return the “dev” tracker client to route the request (and prevent confusion).

The load balancer strategy that attempts to do degradation is the DegraderLoadBalancerStrategy. Here are some facts about the degrader strategy: <ul> 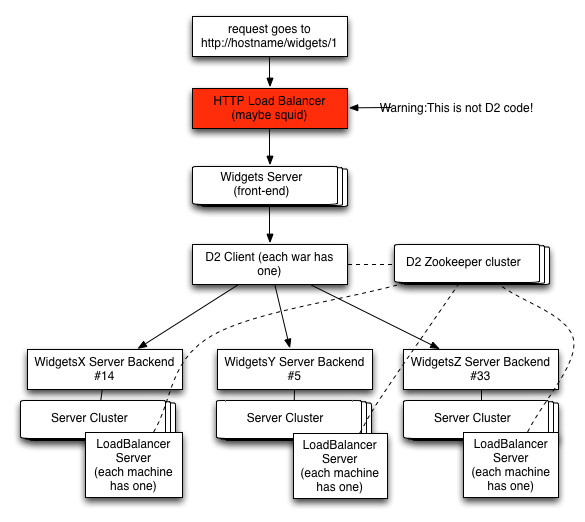 Here is an example of the code flow when a request comes in. For the sake of this example, we’ll a fictional widget service. Let’s also say that in order to get the data for a widget resource, we need to contact 3 different services: WidgetX, WidgetY, and WidgetZ backend.

On the server side:

On the client side:

In D2, a store is a way to get/put/delete properties.

The file system implementation simply uses a directory on the local filesystem to manage property updates. When a property is updated, a file is written to disk with the property’s key. For instance, putting a property with name “foo” would create /file/system/path/foo, and store the serialized property data in it. The File System will then alert all listeners of the update.

The in-memory implementation of Dynamic Discovery just uses a HashMap to store properties by key. Whenever a store is put/delete occurs, the HashMap is updated, and the listeners are notified.

The toggling store that wraps another PropertyStore. The purpose of the toggling store is to allow a store to be “toggled off”. By toggling a store off, all future put/get/removes will be ignored. The reason that this class is useful is because LinkedIn wants to toggle the ZooKeeper stores off if connectivity is lost with the ZooKeeperCluster (until a human being can verify the state of the cluster, and re-enable connectivity).

In D2, a registry is a way to listen for properties. Registries allow you to register/unregister on a given channel. Most stores also implement the registry interface. Thus, if you’re interested in updates for a given channel, you would register with the store, and every time a put/delete is made, the store will update the listeners for that channel.

By default, none of the stores in Dynamic Discovery are thread safe. To make the stores thread safe, a PropertyStoreMessenger can be used. The messenger is basically a wrapper around a store that forces all writes to go through a single thread. Reads still happen synchronously.

We have beans in the com.linkedin.d2 JMX name space.